Werribee Gorge Scenic Rim is a 12.4km, grade 4 hike located in the Werribee Gorge State Park, Victoria. The hike should take around 5 hrs to complete.

Parts of this hiking trail traverse through private land. You will need to seek an alternate route or seek permission of the land owner to access their land.

In my opinion this is one of the most scenic gorge walks close to Melbourne. This fairly demanding hike showcases many of the parks natural features as we take in the gorge from every angle along its scenic rim. Sections of this hike follow clearly defined trails with the rest being off-trail. Be prepared for some steep rugged sections, amazing views and two river crossings.

Starting at Meikles Point Picnic area follow the Werribee River to the west until reaching the Short Circuit track to the right. The Short Circuit track ascends a wide gully before climbing onto the ridge via a disused management track. this part of the trail is a variation of the Short Circuit trail so the track is not clearly defined. At the top of the ridge you will come across The Shelter Shed, built in 1908. From this point you follow an old vehicle trail north back to Short Circuit track. Turn left at the junction then left again at the Werribee Borge Circuit trail. Continue to walk west via Eastern viewpoint, for views of the Island, past picture point, which overlooks Needles Beach, and on to Western Viewpoint where you can take in a view of the Werribee river below. From Western Viewpoint the trail then descents into the gorge via a rocky but well defined trail. Poles will be useful in this section.

Follow the trail along the eastern side of the river above Blackwood pool. The trail beyond this point follows the Werribee River through the gorge. It is a well defined trail with some rocky sections. After a few kilometres you will reach a rock face on the left of the trail. At this point you will need to locate a suitable crossing point to the opposite side of the river. Listen out for running water as that is where you will often find the best crossing points. Turn left once you cross the river and walk to the entrance to Ironbark Gorge.

Ascend the steep ridge immediately to the right of the gorge. This is called Falcons Spur and is a well defined but rocky trail. Alternatively you can follow Ironbark Gorge along its length to rejoin the Falcons lookout trail. The trail is not as well defined though. After about 200m the ridge levels out to expose some amazing views through the Werribee Gorge.

Continue along this trail to the base of Falcons lookout and a popular rock climbing site. There is a set of timber stairs taking you to the base if the site. From Falcons lookout the trail follows the crest of a wooded ridge before dropping into a narrow and shady valley. This trail them enters the upper section of Ironbark Gorge before climbing out of the valley and on to IronBark car park.

Turn left and walk 400m along the gravel road to the train line crossing. Immediately to your left you will see the start of the Western Bluff track. Gradually descend the ridge to the rocky outcrop of Western Bluff. From the bluff the trail descended steeply via Needles spur into the depths of the Werribee Gorge.

When you reach to lookout high above Needles Beach you have two options for returning to the trail head.

Option 1: Continue down the spur to the Werribee River, turn right then follow the trail on true left of the river via Needles Beach and the cable traverse back to Meikles Point.

Option 2 (this hike): Descend into the narrow gully immediately south of Needles Spur. Ascend the rocky ridge then follow it along its length for a few hundred metres. As soon as the trail starts to level out you will see Pyramid Rock emerging on your left. Turn towards Pyramid Rock and cross yet another gully before ascending the bluff to the summit of Pyramid Rock.

Follow this ridge north along its length until you reach a rocky outcrop which is Pyramid Rock.

From this high vantage point you will be rewarded with possibly the best views of Werribee Gorge and the Werribee River below. To the south east you will see the plains of Bacchus Marsh while to the north you can see as far as Centenary hill at the other end of the gorge.

After you have finished soaking in the views retrace your steps along the left hand side of the ridge and you will be further rewarded with views over the steep gorge walls below. When you reach the top of the ridge keep heading south east across a few shallow gullies until you reach a large cleared gully. You can choose to descent the gully or follow the open ridge in a northerly direction down into the gorge and the Werribee River.

Once you reach the Werribee River locate the best crossing point (as this will vary depending on water levels) then turn right to follow the old water race along the Werribee River gorge trail back to your starting point at Meikles Point Picnic area.

Werribee Gorge State Park is part of an Aboriginal cultural landscape that includes the traditional Country of the Wadawurrung and Wurundjeri Peoples. Werribee Gorge is a wild, rugged natural beauty shaped by 500 million years of geological history. A range of challenging walks amid the steep, river-washed gorge and surrounding rocky ridges offer spectacular views and access to a rock-climbing site within the park. Self-sufficient visitors can picnic and hike to explore this unique park and its distinctive settings.

Centenary Walk and The Island (12.5km) 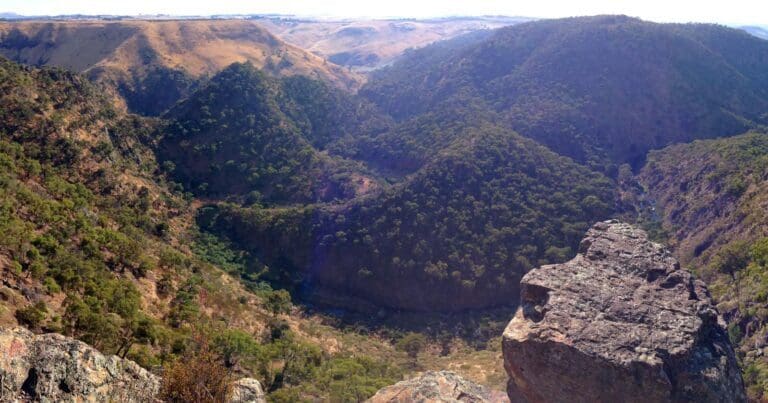