Western Bluff and Falcons Lookout is a 6.1km, grade 4 hike located in the Werribee Gorge State Park, Victoria. The hike should take around 3 hrs to complete.

Parts of this hiking trail traverse through private land. You will need to seek an alternate route or seek permission of the land owner to access their land.

This Western Bluff and Falcons Lookout hike commences at the Western Bluff car park and gradually descends the ridge to the rocky outcrop of Western Bluff. From the bluff the trail descended steeply via Needles spur into the depths of the Werribee Gorge.

Once I reached the Werribee River I crossed via some large rocks then turned left to follow the Werribee River gorge trail to Needles Beach. A great spot for a rest and a fish. I then continued along the trail for about 150m before finding a suitable crossing point back to the opposite side of the river. Listen out for running water as that is where you will often find the best crossing points. I then turned left and walked back to the entrance to Ironbark Gorge.

I slowly ascended the steep ridge immediately to the right of the gorge. This is called Falcons Spur and is a well defined but rocky trail. Alternatively you can follow Ironbark Gorge along its length to rejoin the Falcons lookout trail. The trail was not as well defined though. After about 200m the ridge levelled out to expose some amazing views through the Werribee Gorge.

I continued along this trail to the base of Falcons lookout and a popular rock climbing site. There is a set of timber stairs taking you to the base if the site. From Falcons lookout the trail followed the crest of a wooded ridge before dropping into a narrow and shady valley.

This trail them enters the upper section of Ironbark Gorge before climbing out of the valley and on to IronBark carpark.

From the carpark it was then a short 400m walk back to my starting point.

Werribee Gorge State Park is part of an Aboriginal cultural landscape that includes the traditional Country of the Wadawurrung and Wurundjeri Peoples. Werribee Gorge is a wild, rugged natural beauty shaped by 500 million years of geological history. A range of challenging walks amid the steep, river-washed gorge and surrounding rocky ridges offer spectacular views and access to a rock-climbing site within the park. Self-sufficient visitors can picnic and hike to explore this unique park and its distinctive settings. 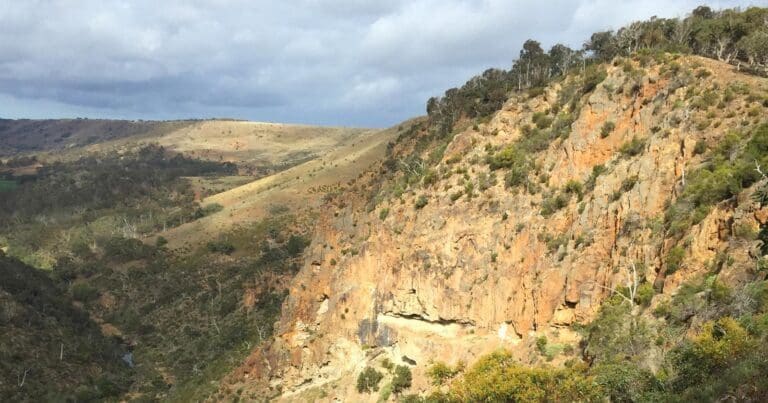