Uluru Base Walk is a 11km, grade 3 hike located in the Uluru-Kata Tjuta National Park, Northern Territory. The hike should take around 3 hrs to complete.

Standing 348m high, Uluru's mass is like an iceberg, with most of its mass located beneath the earth. Explore this monolith by taking the Uluru Base Walk around its entire base. Enjoy various waterholes, sacred meeting areas and numerous rock art sites. Following rain you can also view native wild flowers along the desert plains.

You can take the entire Uluru base walk, or just concentrate on one or more of its sections, depending on how much time you have, your level of fitness and the weather.

Each section will look and feel completely different. Some areas are surprisingly green and lush, providing plenty of wildlife and bush tucker spotting opportunities, while other sections feel open and vast, with little shade.

The base walk will take you through acacia woodlands and grassed claypans. You will encounter bloodwoods, native grasses, and many waterways and waterholes.

You can fly directly to Yulara from a number of Australian cities, including Sydney, Melbourne, Brisbane, Darwin, Adelaide and Alice Springs. Approximate flight times are:

If you’re travelling from overseas or another Australian city, your flight will probably connect via one of the cities above.

Drive
Many visitors come to the park as part of a road trip around outback Australia.

The famous Red Centre Way is a multi-day drive of this extraordinary region, taking in Uluru-Kata Tjuta National Park, Watarrka (Kings Canyon), Tjoritja (West MacDonnell Ranges), Alice Springs and more. You can find out more on the Tourism NT website.

Uluru is 465 km from Alice Springs by road. If you are driving directly this should take about 5.5 hours.

The ancient red rock formations of Kata Tjuta rise from the dusty land to make an incredible sight in Central Australia. Witness the spectacular rocks as they appear to change colour and immerse yourself in the Aboriginal stories of this special place, 500 million years in the making.

Kata Tjuta is a group of large, ancient rock formations about 30 kilometres (18.6 miles) away from Uluru in Australia's Red Centre. Together, these giant stone formations form the two major landmarks within the Uluru-Kata Tjuta National Park. Kata Tjuta is made up of 36 domes spread over an area of more than 20 kilometres (12.4 miles). The highest point is Mount Olga, named in honour of Queen Olga of Württemberg by the explorer Ernest Giles. 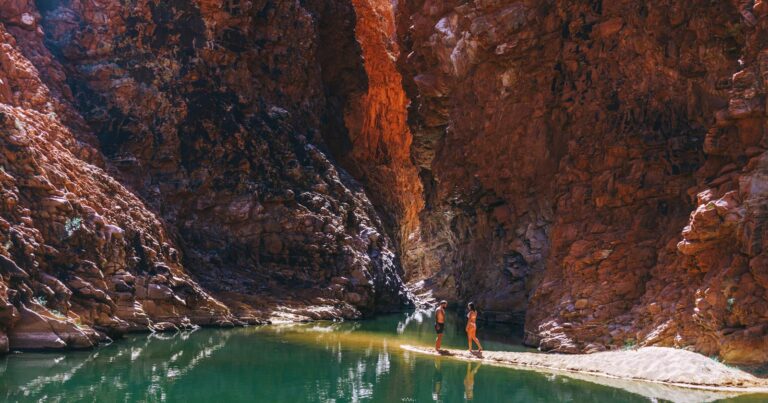