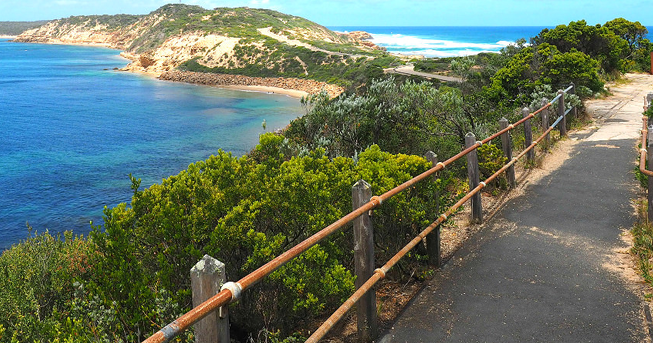 Point Nepean also offers some of the best views on the Mornington Peninsula across to Queenscliff and out the Port Phillip Bay Heads.
Point Nepean is part of Boonwurrung coutnry. the Boonwurrung people lived on and around Point nepean for thousands of years gathering shellfish and other foods along the coastline. The interaction with early settlers and ceremony make it an important place. Extensive shell middens are reminders of their enduring association.

Point Nepean has evidence of some of the earliest European settlement in Victoria, including pastoral activities and lime burning. Shepherd Hut, located in the Quarantine Station is one of the earliest intact limestone building in Victoria. It's cellar dates back to 1845.

The entrance to Port Phillip was the most heavily fortified fort in the Southern Hemisphere. There are many Colonial and Commonwealth structures from teh 1880's-1940s located about the park. Fort Nepean is considered to be one of the best examples in Australia of a major fort complex exhibiting the changes in military engineering over the 19th and 20th centuries.

Of course for those still with energy to burn, you could tie this into the Mornington Peninsula 100km Walk that includes walks around The Coastal Walk, The Bay Trail and the The Two Bays Walking Track.

Point Nepean National Park is part of an Aboriginal cultural landscape in the traditional Country of the Bunurong People. Parks Victoria respects the deep and continuing connection that Bunurong Traditional Owners have to these lands and waters, and we recognise their ongoing role in caring for Country.

The history of Point Nepean spans back thousands of years to the Bunurong people and it has also played an important role in shaping the early European settlement and defence of Australia, being used to quarantine people arriving in Victoria, defending the colony and for military training.

Walk or cycle through this rugged coastal landscape and and enjoy panoramic ocean and bay views.

Explore military forts and tunnels, learn about the people who passed through the Quarantine Station - and see fascinating artefacts spanning back over 150 years. View the site and memorial where Prime Minister Harold Holt went missing while swimming at the nearby Cheviot Beach.