Mount Tibrogargan Summit is a 3.3km, grade 4 hike located in the Glass House Mountains National Park, Queensland. The hike should take around 1.25 hrs to complete.

Mount Tibrogargan is located within the Glass House Mountains National Park. Volcanic peaks tower above the surrounding landscape are so significant; they are listed on the Queensland and National Heritage Register as a landscape of national significance. Walking tracks, ranging from easy to very challenging, lead through open forests to lookouts offering panoramic views. Named by Cook during his voyage along Australia's east coast, they are rhyolitic volcanic plugs left by volcanic activity millions of years ago. This area has special significance for the Gubbi Gubbi Aboriginal people.

Climb equivalent to 50 storeys of a high rise building. The summit route starts from the Mountain View lookout and continues for 300m up the western slope of the mountain. This first section of summit route has very loose and unstable rock until you reach the 'No waiting zone'. The route then continues up a near vertical rockface to the summit-364m above sea level.

The Summit Route is not suitable for kids and inexperienced hikers who cannot climb without assistance. If you doubt your ability, DO NOT RISK IT!

Glass House Mountains National Park is a heritage-listed national park at Glass House Mountains, Sunshine Coast Region, Queensland, Australia. It is also known as Beerburrum Forest Reserve 1. It is 70 km (43 mi) north of Brisbane and consists of a flat plain punctuated by rhyolite and trachyte volcanic plugs, the cores of extinct volcanoes that formed 27 million to 26 million years ago. The mountains would once have had pyroclastic exteriors, but these have eroded away.

The national park was established in 1994. On 23 June 2010 the Queensland Government announced the expansion of the park to include an additional 2,117 hectares. It was added to the Queensland Heritage Register on 3 May 2007.

The Glass House Mountains are a group of dome shaped hills and conical peaks rising sharply above the surrounding sub-coastal lowlands. They are the remnants of rhyolite and trachyte volcanic plugs and are located in southeast Queensland 65-75 kilometres north of Brisbane and west of the townships of Glass House Mountains and Beerburrum.

Mount Tibrogargan (364m) and Mount Cooee (106m) are composed of alkali rhyolite. Mount Cooee has caves and there are the remains of an old trigonometry station at the summit. It is a habitat for the peregrine falcon (Falco peregrinus). Mount Tibrogargan is the third highest and is open for the public to climb.

Mount Beerwah (556m) is composed of alkali trachyte. Near the top, there are large hexagonal cooling columns on its north side (the Organ Pipes). The mountain also has early timber trails and timber getters' campsites on the eastern side. It has caves and is also a peregrine falcon habitat. Mount Beerwah is the highest peak within the park; however public access to the "tourist track" in the National Park has been restricted since 2009.

Mount Ngungun (253m) is composed of alkali rhyolite. This mountain also has good examples of vertical columnar jointing and has caves. There is evidence of early 1950s quarrying activities.

Mount Coonowrin (Crookneck) (377m) is composed of alkali rhyolite. It has good examples of vertical columnar jointing and has caves. Timber and steel pitons left by climbers can be found, though the mountain is now closed to climbers. It is a habitat for the peregrine falcon. Mount Coonowrin is the second highest; however, public access to it has been prohibited since 1999 due to the danger of trachyte rock stability.

Mount Elimbah (109m) is locally called Saddleback because of the saddle like dip between the peaks. It is composed of alkali rhyolite and right-angled trenches used for World War Two infantry training can be seen on the lower slopes

Mount Beerburrum (278m) is composed of porphyritic trachyte. The mountain has complex rainforest, with some endangered plant species such as Tindal's stringybark (Eucalyptus tindaliae), Pink bloodwood (Corymbia intermedia) and Smooth-barked apple (Angophora leiocarpa). Scribbly gum (Eucalyptus racemosa) is locally predominant in places, with the largest tract retained on Mount Beerburrum. The mountain has a forestry fire tower with a viewing platform at the summit.

Mount Tunbubudla, also known as the Twins (west twin 294m, east twin 338m), is composed of alkali rhyolite. The majority of the mountain is covered in dry sclerophyll forest. There are also areas of exposed rock dominated by the rare Bronze-barked Tea Tree (Leptospermum luehmannii), a plant restricted to the Glasshouse Mountains.

Mount Tibberoowuccum (220m) is composed of alkali rhyolite. The mountain is a dome-shaped rock surrounded by eucalypt open forest, as well as complex rainforest, although the area is not extensive. There is a small population of Narrow-leaf bitter-pea (Daviesia Mimosoides) present on the southern slope of the mountain. This shrub is widespread in Victoria and New South Wales, but rare in Queensland, and the Mount Tiberoocwuccum population is the most northerly known. 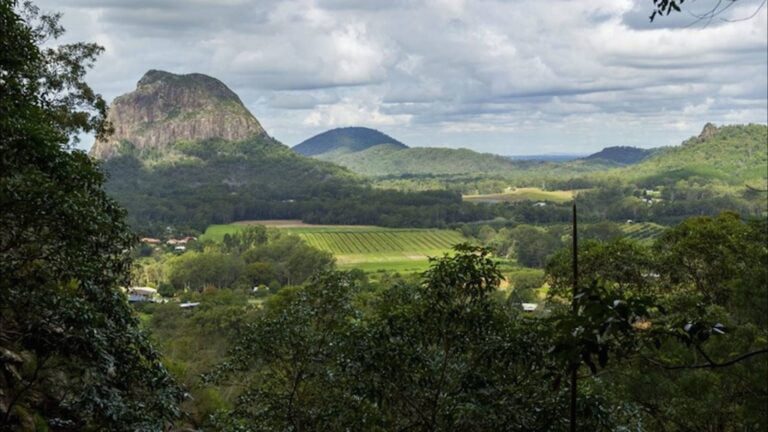 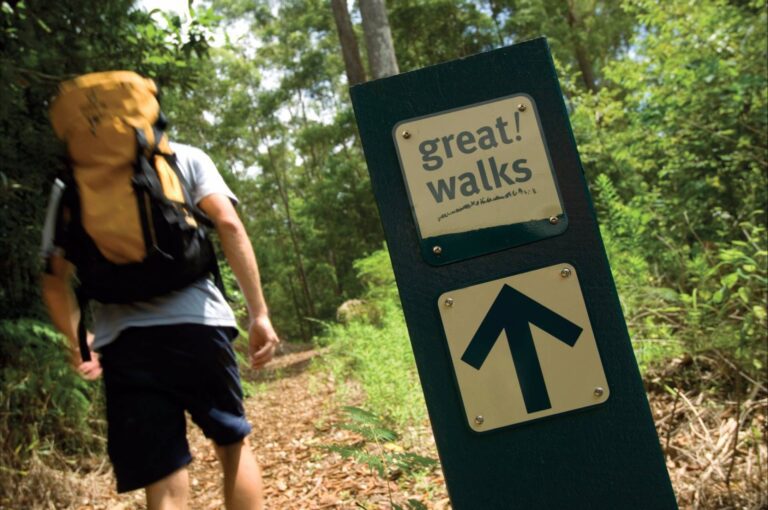