Mount Lubra and Twin Peak is a 9km, grade 5 hike located in the Grampians National Park, Victoria. The hike should take around 4.5 hrs to complete.

The Mount Lubra and Twin Peak hike summits Mount Lubra (992m) the highest peak in the Serra Range. The Serra is the longest of the ranges in the Grampians from Mount Rosea in the north to Mount Sturgeon at the southernmost point of the Grampians near Dunkeld. Despite this, there are not that many hiking trails along its length.

The Mount Lubra and Twin Peak hike commences at the junction of Grampians Road and a sandy vehicle track. Follow this track west for approximately 850m towards the Serra Range. Turn left at the track junction and walk approximately 50m to a gully that has been washed out by recent flooding. This has made the gully very easy to follow as it slowly ascends towards Mount Lubra.

On reaching the end of the gully continue to walk west towards the base of the Mount Lubra cliffs. Keep a keen eye out for a trail as one does exist with the odd occasional trail marker. If you can't see any trail or markers simply follow the cliff line south until you enter the saddle between Mount Lubra and Twin Peak.

From this point there is no trail and no markers. Turning right (north) you will need to pick your way to the 992m summit of Mount Lubra. The closer that you ascend along the cliff line the more challenging your climb will be so I would suggest heading north-north west on your approach. After visiting the summit, for spectacular views, you can either return to the saddle via the same route or follow a shallow gully south west and into the gully below. Note that since the 2016 fires the regrowth in the gully is thick and full of thorny scrub. If you choose to descend via the shallow gully there is no other way through than to fight your way.

Once across the saddle, follow the spur that heads south east towards Twin Peak. There is no designated trail but you will spot the occasional cairn and tape marker in trees. It is best that you simply choose your route based on your level of confidence as the further east you traverse before ascending, the more challenging the hike becomes with vertical faces to climb. My tip is to remain on the southern side of the spur and gradually ascend along the bluff to Twin Peak.

After visiting both peaks, return to the saddle and locate the trail that you were following earlier on the north eastern side of the saddle. Follow this along the cliffs under Mount Lubra then descend back along the gully and bush track to your vehicle. There are a number of gullies you can follow but I would suggest keeping to the flood damaged ones as all others will be nothing more than hours of bush bashing.

The Mount Lubra bushfire was started by a lightning strike late on 19 January 2006 near The Grampians in Australia. By the time it was extinguished it had burned for approximately two weeks and covered approximately 130,000 hectares of land.

The fire burned, in difficult terrain, throughout 20-21 January without any serious impact. On 22 January, hot and dry conditions that had persisted for several days worsened. The fire spread rapidly in a southerly direction towards Dunkeld, south of Grampians National Park. The fire front reached the outskirts of Willaura (south-west of Ararat), before a strong but dry wind change took the fire back in the opposite direction. Winds of up to 120 km/h sent the fire northward extremely quickly, impacting a number of small communities along the eastern side of The Grampians, including Mafeking, Moyston, Barton, Jallukar and Pomonal. A man and his son died between Moyston and Pomonal when they were caught up in the fire. The fire was eventually controlled approximately two weeks later, having burned nearly 47% of the Grampians National Park, as well as a significant amount of private property, a total of 184,000 hectares. Approximately 25 homes were destroyed, mostly to the west of Moyston and around Pomonal. Over 50 sheds and outbuildings, 1500 kilometres of fencing, as well as 62,000 head of sheep and 500 head of cattle were lost to the blaze.

M8 to Ballarat, A8 to Ararat, C222 to Grampians through Moyston and Pomonal. From Halls Gap take the Grampians Road C216 for approximately 14.6km south towards Dunkeld. Your start point is at the junction of a rough vehicle track on your right (approximately 5.2km past Borough Huts).

Renowned for rugged mountain ranges, rich cultural heritage and breathtaking scenic views, the 168,000 hectare park is ideal for a wide range of outdoor activities. The many walking tracks will take you on a journey to waterfall vistas, ancient geological rock features and forests. There are guided tours, and with a large network of roads available, car touring is a great way to explore. Renowned as the major attraction in the region, the Grampians National Park is a must-visit destination for all travellers, backpackers and day-trippers in Victoria. The spectacular setting of the mountainous landscape boasts a wide array of attractions and activities for visitors to the region. The Grampians National Park (also Gariwerd), commonly referred to as The Grampians, is a national park located in the Grampians region of Victoria, Australia. The 167,219-hectare (413,210-acre) national park is situated between Stawell and Horsham on the Western Highway and Dunkeld on the Glenelg Highway, 260 kilometres west of Melbourne and 460 kilometres east of Adelaide. 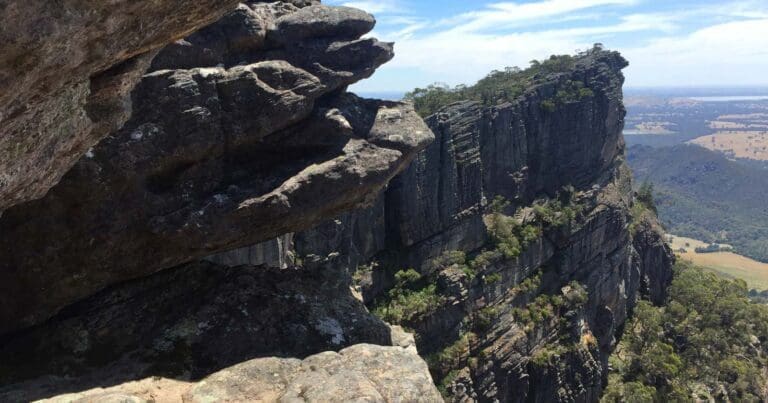 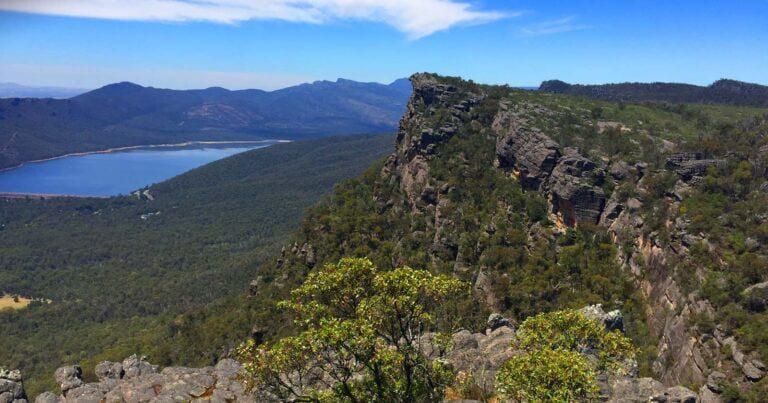 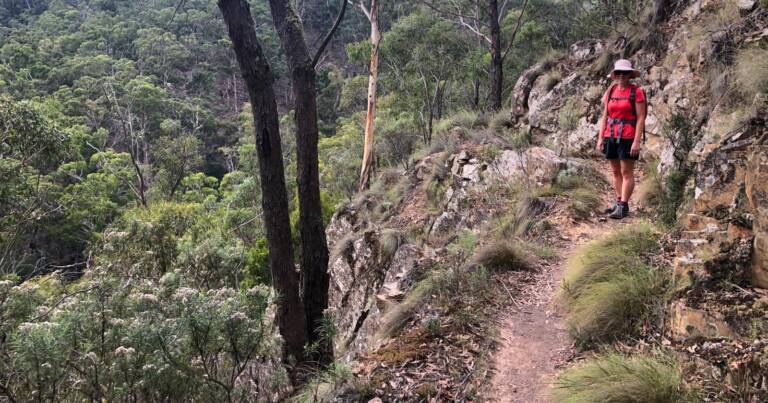