Tombstone Overlook is a 2.75km, grade 3 hike located in the Alpine National Park, Victoria. The hike should take around 1.5 hrs to complete.

The Tombstone Track (A.K.A.: Graveyard Overlook, O'Connell's Overlook) on the Mighty Mitta.

This track has been in 'informal' existence for over one hundred years, and was originally named after one of the founding families of Omeo. It starts from the old quarry at the hairpin bend less than a kilometre north of the Anglers Rest campground and the Blue Duck on the Omeo Highway. In the past few decades its been used by the few hikers and locals who know about it, Mittagundi and other school groups doing abseiling, and Packer's Horse Rides. Its well established and takes anywhere from 15 to 25 minutes to walk, depending on fitness and how many flowers need sniffing.

There is limited parking along the road at the quarry, more just down the road at a turnout, or if one has a high-clearance vehicle there's a well-rutted dirt track a few hundred meters north that takes one to the banks of the Mitta at the old "Winter Classic Raft Take-out". The track actually starts at the very first big gum tree north of the quarry. Hard to miss.

There are two very short sections of track that have been eroded, but essentially the track is in excellent shape and hard to lose. Going out to the wonderful overlook one hits an eroded gully after about 15 minutes of walking. Stay left and bear uphill. The only other potentially confusing spot is right at the end, where you're obviously reaching the main river canyon edge. Stay left down a few rock steps, then head out to the rocks in front of you for a great view of the Mitta, Graveyard Rapids directly below (hence the track name), and Mount Wills in the distance. Its an awesome place for cheese & apples or other snacks & beverages, and of course photographs.

The abseil rocks are just to the right, but be warned; if you clamber up those rocks, there is no railing and a sheer cliff of something like eighty meters. Don't go near the deadly edge, and don't go there with children who can't assess such a danger. The risk is your own to manage for yourself, family and friends. To paraphrase a Grand Canyon ranger friend of mine; 'Every Australian has the right to kill themselves if they so choose'. However the view has been described by a Parks Victoria ranger as the best he's seen in Victoria.

One can return the way you came, or there is a rough track down the hill towards the north (upstream) to the river. That part takes about 10 minutes. Once there, one can turn right (downstream) and see the very close rapids, probably the most technical whitewater on the river, or go left (upstream) for a fifteen minute walk along the river track back to the Winter Classic Takeout site. If your car's there, you're done. Otherwise you can walk up the rough dirt road back to the highway, and turn left for about 200 meters back to the quarry. Be VERY CAREFUL along this road; there are caravans, log trucks, and motorcyclists who always think they're God's gift to riding (but often aren't).

(PS: Friends of the Mitta has been working with Parks Victoria for over two years to formalise this track. Due to funding and resource issues for this very remote part of the Park, its taking a while. The good news is that there are several very dedicated and committed rangers keen on making this wonderful track and overlook a reality. We're presently trying to work out how to keep the track discreet and pristine, whilst providing interpretive and safety signage in order to avoid unsightly railings.)

You can walk or drive to the trailhead from the Anglers Rest Campground, Blue Duck, or CRB camps. If walking plan on 10 minutes or so, if driving, about 1 minute. Head north on the Omeo highway, past Callaghan's road and up the hill to the first bend. At the top there is an old rock quarry on the east, with a wooden sign saying: 'Friends of the MittaMitta' etc. Park either at that sign or just past it next to the gravel & the 'When Frosty' sign. (If you get to the Bundara bridge you went too far.) Make sure you're safely off the bitumen, & watch for cars. The trail begins at the very next road marker north, (sometimes marked with pink tape, or blue twine). 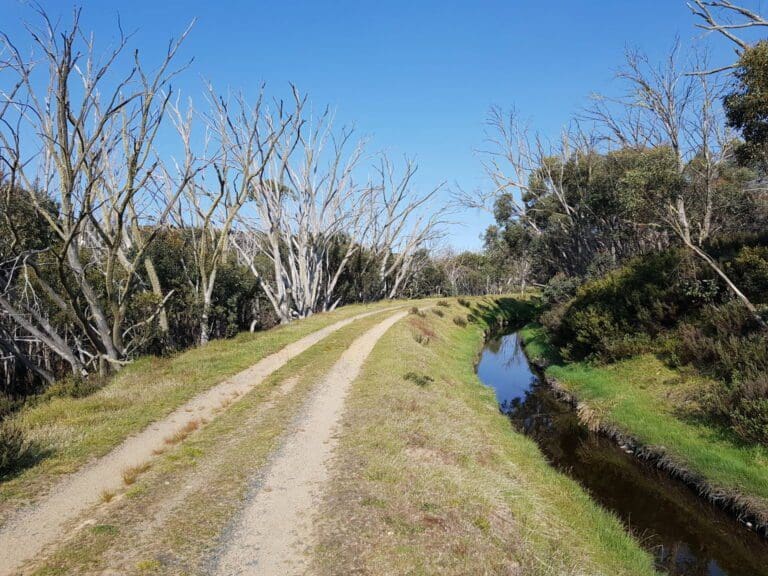