Mount Feathertop - Champion Spur is a 26.4km, grade 4 hike located in the Alpine National Park, Victoria. The hike should take around 2 days to complete.

The Mount Feathertop - Champion Spur hike summits Mount Feathertop, the second highest mountain in Victoria and one of the most picturesque peaks in the state. It is linked to the nearby Mount Hotham ski resort by The Razorback, a high narrow ridge, but otherwise surrounded by steep slopes which continue right to the summit. Unlike most nearby mountains, Mount Feathertop has steep slopes right to the top and does not have the rounded summit dome that is typical of many nearby peaks.

Mount Feathertop is probably the most appealing peak in the high country. It provides terrific hiking in summer and in winter it is a great venue for mountaineering and extreme skiing. But be careful, as it averages a death per decade. Most deaths are in winter and most come from not treating cornices with the respect they deserve.

Water can be found at a natural spring approximately 500m along the North West Spur Track from Feathertop Track. You will find it on the right hand side of the track.

While it was not burnt in 2006/07 fires, an 80 cm wide track was cut up the length of Champion Spur. This track has not been maintained and is slowly becoming overgrown again.

A moderately difficult and rarely used route recommended for those who are not afraid of a little scrub bashing and who are looking for a new route up Mount Feathertop. The route follows an old river level East Ovens Track from Harrietville before turning east up a former forestry road to run straight up the middle of Champion Spur. This section of the track along the river is now partly eroded and overgrown, so it may be better to follow the Bon Accord track for 3 km and scrub bash down to the river before fording it and picking up the old track from there.

Once away from the river, the old track generally sticks to the middle of the spur. While it was not burnt in 2006/07 fires, a dozer was sent up it at that time to provide clear access. Beyond the road head near the top of the spur, a 80 cm wide track was cut for the last 1,200 metres to join the Razorback walking track a little to the south of the corner at grid 112 137. 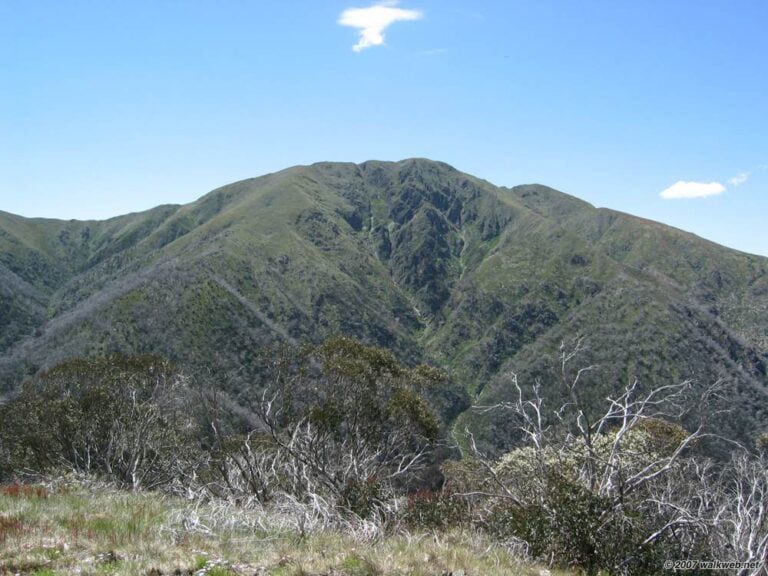