Montezuma Falls Walking Track is a 18.6km, grade 3 hike located in the Zeehan Montagu, Tasmania. The hike should take around 6 hrs to complete.

An easy walk, through rainforest, along the route of the historic North East Dundas Tramway. At 104m, Montezuma Falls are one of the highest waterfalls in Tasmania and the track takes you right to the base of the falls.

You’re sure to get close to several different birds along the way, notably White’s thrush, which is a medium-sized and speckled brown and white ground dwelling bird. It forages quietly on the rainforest floor and, when disturbed, flies only a short distance before settling again, enabling you to get a second look.

An 1890 mineral survey showed the falls marked as Osbourne Falls. Montezuma was the name of the last Aztec emperor of Mexico (1466-1520). In Tasmania, his name appears to have originally been applied to a mining company — the Montezuma Silver Mining Company, which was formed in 1891 and held leases on the northern slopes of Mount Dundas.

The creek immediately below the falls was once spanned by a wooden trestle bridge that was 160 ft. long and 50 ft. high and took five months to build. Today derelict pieces of timber, moss-covered concrete piers and rusty bolts are the only remains of this bridge.

The North East Dundas Tramway that ran from Zeehan to Deep Lead (now Williamsford) was constructed to facilitate access to mining sites in the Mount Dundas and Mount Read areas.

The gauge was 2 ft., which was a relatively narrow gauge and explains why the line was known as a tramway rather than a railway. The narrowness of the gauge was chosen to suit the winding hillsides and also to assist in lowering the cost of construction.

The line continued to operate infrequently until 1925 and was officially closed on 4 July 1932 and the rails were removed in the early 1940s.

Dogs are welcome if kept on a leash. Bicycles are permitted and this track is well-suited for mountain bikes.

Follow the signs to Williamsford and Montezuma Falls 2km south of Rosebery on the Murchison Highway (A10). 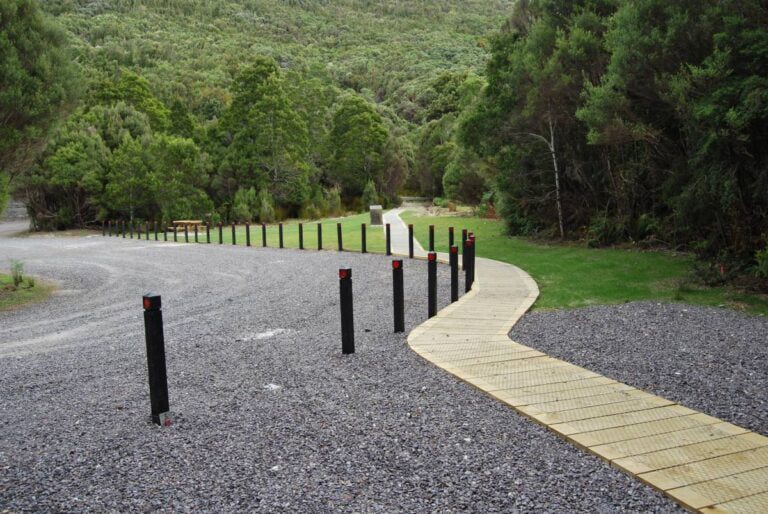