Catherine River Speculation and Mount Cobbler is a 42km, grade 5 hike located in the Alpine National Park, Victoria. The hike should take around 4 days to complete.

The Catherine River Speculation and Mount Cobbler circuit is a four day hike which traverses sections of the remote Viking Razor Wilderness Zone. Steep and scenic country with lofty tops, a high level plateau and deep valleys. There is a seldom visited section of the Catherine River with a magic little riverside campsite and swimming hole. Half of this circuit is off trail in steep, remote, rugged and challenging terrain. You will need to be fit, experienced, have excellent navigation skills and be well equipped for alpine conditions.

Day 1 (10km). Commencing at the junction of Speculation and King Basin Roads head south over the bridge and locate the narrow foot trail on the southern bank of the river. The trail heads south then turns south east then east as it ascends steeply to King Spur before following the cliff lines near the top of the ridge to Mount Koonika. From the summit, follow the ridge line south east, descending onto the 4wd track to camp at Mount Speculation.

Day 2 (10km). Today the trail will take you into remote area of the Viking Wilderness where not many people go. You will need to posses excellent navigation skills and be prepared to forge your own trail. Following Speculation Road, initially north, from Mount Speculation. At the hair pin turn, continue north, off trail, along a narrow ridge. Follow this ridge north, losing all of the height gains of day 1 to the Catherine River below. There are a lot of steep sections you will be required to descend. One on the river turn right and follow the river north for approximately 500m , keep an eye out for a suitable campsite on the river flats.

Day 3 (10km). After breaking camp, head straight up, north west, out of the river (300m) on a very steep climb. Then west along a ridge (another 150m) to the edge of the plateau. Continue through the snow gums for approximately 2.5 km to cross the plateau before reaching the Lake Cobbler Track. Turning right (east) follow the track down to Lake Cobbler. After gathering water from the lake continue west along the Mount Cobbler Walking Track for approximately 3km until you reach a flat and open campsite.

Day 4 (10km). From the campsite, continue west until you reach a signposted trail junction. Turning north (right) it is a short, moderate and steep 1.5km climb to the summit of Mount Cobbler. From here you can enjoy amazing views of the surrounding peaks include Mount Typo to the north-east, Mount Koonika and Mount Speculation to the south-east, and Mount Stirling to the south-west.

After leaving the summit follow the trail back to the junction and continue heading south for approximately 5.5km until you again reach the junction of Little Cobbler Road and the Cobbler Lake Track. Follow Little Cobbler Road in a southerly direction. After about 700m you will reach the Speculation Road junction. Continue past Speculation Road and keep heading south for another 450m and you will reach Muesli Spur Track on your right.

Descend along the steep and rugged Muesli Spur back to the trail head and your car.

Camping at the trail head

Camping is available close to the trail head at the following locations.

Water can be procured;

Half of this hike will be off trail through often dense scrub. There will be rock scrambling with packs, possible pack hauling, steep and very steep sections and walking through jagged cliff lines. You will need to be comfortable with all of the above and be a moderate to fast walker while doing so. You will need to work closely as a group and assist with route finding and forging a trail through the scrub.

This is an alpine area and conditions can change quickly. All of your group members must be equipped with map and compass and the appropriate gear.

From Mansfield, travel along Mount Buller Road for approximately 32km until you reach the toll gate at Mirimbah (you will need to pay an entry fee during winter). Once you've passed through the gates, turn left into Stirling Road (2WD) and keep going until you reach Telephone Box Junction (TBJ). Between Mirimbah and TBJ is approximately 8km of unsealed road. Turn right at the junction and follow the Stirling Circuit Road (2WD) for a further 16.5km where you will find Speculation Road (possible 4WD) on your right. Turn onto Speculation Road and travel 8.8km to the junction of King Basin (4WD) and Speculation Roads. This is the trail head.

During winter, vehicles are not permitted to go any further than TBJ, and all 2-wheel drives must carry chains when travelling to this point. In summer, all vehicles can continue further via The Circuit Road. The Circuit Road winds throughout the various sub-alpine and alpine forests around Mount Stirling. It is a gravel road but still accessible by 2-wheel drive vehicles. 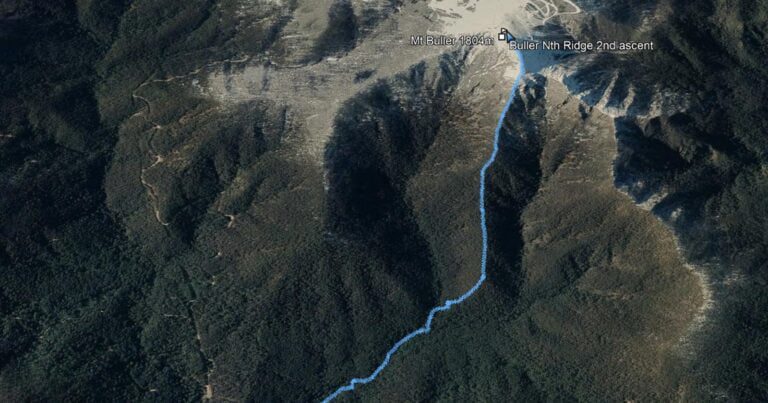