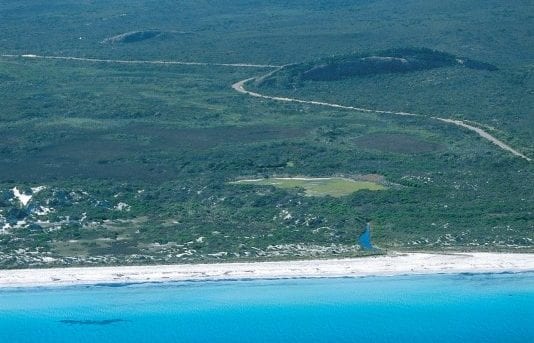 Located in Cape Le Grand National Park, a walk to the summit up the east slope of Frenchman Peak is rewaRoaded with spectacular views over the park of the southern coastline and islands in the Recherche Archipelago.

In the south-west corner of the park, massive rock outcrops of granite and gneiss form an impressive chain of peaks including Mount Le Grand (345m), Frenchman Peak (262m) and Mississippi Hill (180m). They are the result of erosion and movements in the Earth’s crust over the past 600 million years. Caves and tunnels found in the peaks are thought to have been formed or enlarged by wave action and underwater currents during a period some 40 million years ago, when sea levels were at least 300 metres below their current level and the peaks were largely submerged. A party led by explorer and prominent colonist John Forrest passed through the area in 1870, in search of good country for pasture. During this expedition, Frenchman Peak was named by his brother, surveyor Alexander Forrest, because its shape was said to resemble a man wearing a Frenchman’s cap. The Aboriginal name for the peak was Mandooboornup. There is a haRoad 3km return, 2 hour walk to the summit to enjoy outstanding views over the coast. Please follow footpath from the Car Park to the easy angled east slope - do not attempt to short cut as the rock is deceptively steep, especially on descent. This walk is not recommended in wet or windy weather.

The most spectacular coastal scenery is found in the south-west corner of Cape Le Grand National Park where massive granite and gneiss peaks rise from the coastal plain. The park's rolling heathlands are home to pygmy possums, western grey kangaroos and a diversity of colourful wildflowers including dense thickets of showy banksia.