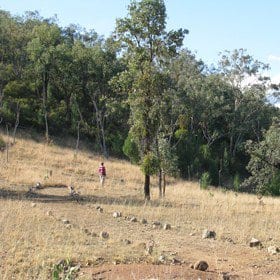 The Western circuit at Sundown National Park veers off from the Permanent track near The Broadwater camping area and heads away from the river to open high ground. Woodland birds such as spiny-cheeked, yellow-faced and fuscous honeyeaters and golden whistlers favour this area near the western boundary of the park. Take in expansive views up the valley into the park as well as to the south and west. Descend back to the camping area via open flats where eastern grey kangaroos graze.

Sundown is a national park in Queensland, Australia, 198 km south west of Brisbane. The park contains spectacular gorge country and a number of peaks higher than 1,000 m.

Access to the park from New South Wales is via a turn-off into Mingoola Station Road at the Mingoola School, along the Bruxner Highway. Then turn right into Glenyon Dam Road and then another right into Permanents Road, which promptly enters the park. This section is the most developed with the Broadwater Camping Area providing toilets, boil-your-own hot showers (boiler on site), short walking tracks, sheltered tables and taps with river and rain water provided at the ranger station. this section is easily accessible for 2WD and motorhomes/caravans/campertrailers under 5 meters.