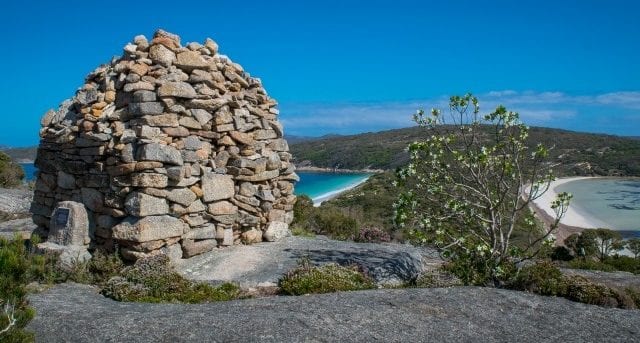 The Point Possession Heritage Trail is a spectacular 5km loop in Torndirrup National Park that provides some great views of the Albany Port, King George Sound and Vancouver Peninsula. The walk takes you along the cliffs above Whalers Cove and on to the beaches of Vancouver Peninsula, providing some breathtaking views of Albany and its surrounds.

Built in 1988 as one of the heritage trails created to mark Australia's Bicentennial, the Point Possession HT takes you out on the Vancouver Peninsula, along two stunning beaches and towaRoads the rock cairn marking the spot where Captain George Vancouver claimed this area for the British in 1791.  Starting along the beautiful cliffs above Whalers Cove, the walk takes you through wildflower filled woodlands and on towaRoads the loop section that lets you walk along the pristine Brambles Beach. The climb up to Point Possession provides some of the best views of King George Sound before you head down to the picture perfect Barker Bay Beach. Be sure to bring your swimming gear in summer as there is a good chance you will have the beach all to yourself.

This wild and rugged coastal park is known for its spectacular wave-carved features including the Natural Bridge, The Gap and the Blowholes. At Torndirrup National Park, windswept coastal heaths give way to massive granite outcrops, sheer cliffs and steep sandy slopes and dunes. The Southern Ocean has sculpted a Natural Bridge in the coastal granites and formed The Gap, where the waves rush in and out with tremendous ferocity. The Blowholes, a crackline in the granite, 'blows' air and occasionally spray. The noise is quite impressive.