Lerderderg Gorge via Link Tracks 1 and 2 is a 8.2km, grade 4 hike located in the Lerderderg State Park, Victoria. The hike should take around 4 hrs to complete.

This Lerderderg Gorge via Link Tracks 1 and 2 hike starts at the Mackenzies Flat Picnic area and follows the Lerderderg River towards Graham's Dam.

Follow the river upstream from Mackenzies Flat Picnic Area to Grahams Dam, which is an attractive pool ideal for swimming. The track along the river up until Graham's Dam is fairly well traveled and easy to follow. Cross the river at this point and continue along the eastern river bank upstream for approximately 600m (trail marker LER503). Beyond Graham's Dam it is slightly overgrown in places but still easy enough to follow.

Continue past this point along the eastern banks of the river to trail marker LER504. It is worth noting that any mapping system I have used actually shows the Link No. 2 track as starting further around this spur. They are all incorrect and the trail actually commences at the marker. Ascent the broad and steep spur via Link 2 Track to the top of the range. Care should be taken on the climb as it is steep and can be slippery in places. The track is easy to follow with a few rock scrambles and has the occasional orange marker on trees to keep you on track. Make sure you stop along the climb to appreciate the view behind you and through the river gorge.

Once you arrive back at Graham's Dam simply follow the river track back to Mackenzies Flat. The alternative is to do the circuit in reverse order from Grahams Dam but I believe the Link No. 2 track is easier to ascend than No. 1 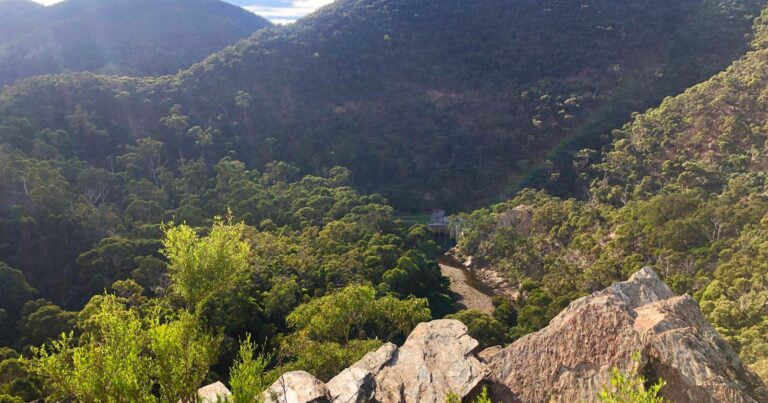