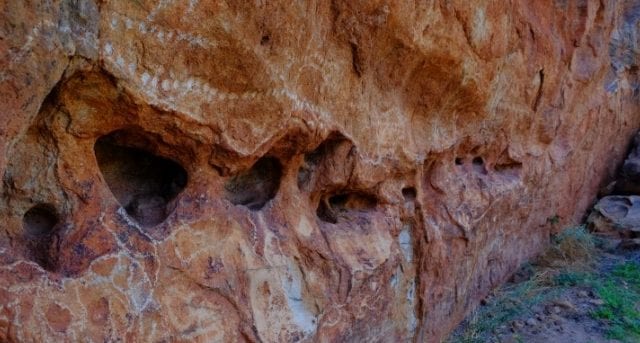 The risks from exposure and dehydration are significant in this area. During the hotter months (at least September – March) these risks are extreme. Temperatures often exceed 40°C.

Ooramboo Trail is an easy 500 metre return stroll leading to a low escarpment where you can view Aboriginal artwork.  It is accessed from the Loop Drive at the southern end of Mount Augustus.

It is easy to see the significance of Mount Augustus to the local Wajarri Aboriginal people. There are several significant artwork sites accessible to hikers via marked trails. No doubt there are many more sites not open to the general public due to cultural sensitivities and difficulty to get to. For a quick look and cultural insights, the easy to get to Ooramboo Trail goes to a low escarpment. Look around without touching under ledges and rock walls for Aboriginal engravings. Continue on for a further 100 metres to get to Edney's Trail.

Rising 715m above the surrounding alluvial plain, Mount Augustus is an inselberg, meaning ‘island mountain’. There are rocky creeks, gorges and open plains supporting a variety of vegetation and wildlife. Mount Augustus is known as Burringurrah to the local Wajarri Aboriginal people. The park was gazetted on 22 September 1989 and is made up of former parts of Mount Augustus and Cobra Stations.

During 1999-2000, the State purchased nearby pastoral leases Cobra and Waldburg and part leases of Mount Philip and Dalgety Downs with the aim of managing the whole area – including the national park – for conservation. The total area is now 607,603 hectares.