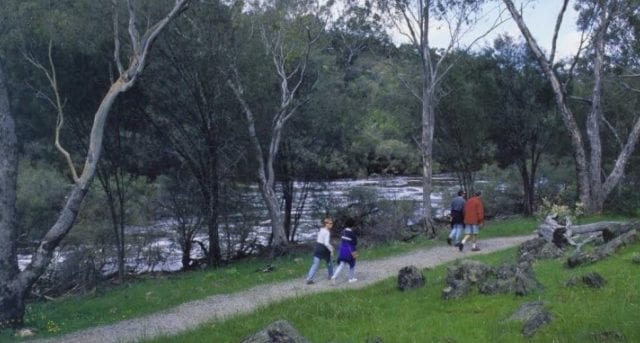 This 11 kilometre loop trail in Walyunga National Park initially follows the Avon River before it ascends steeply to the western side of the river.  It passes through marri and wandoo woodland, currently with a thick understorey of regrowth after fire, before offering good views of the Avon Valley from Woodsome Hill.

The track is rocky and involves some steep gravel ascents and descents.   In late winter and spring there are abundant wildflowers. The trail is marked with black footprints and is best walked in an anticlockwise direction.  Walyunga National Park covers 1,800 hectares of the Darling Range, tucked behind the Darling Scarp, covering both sides of a steep valley.  Just to the east of the park, in the picturesque Avon Valley, the Avon River joins the Brockman River to form the Swan River which passes through the tree lined valley. Walyunga contains one of the largest known Aboriginal campsites around Perth and was still in use by the Nyoongar people late last century. The area has been used as a meeting place for more than 6000 years. Walyunga is an Aboriginal name, but its meaning is uncertain.  Local Nyoongar people believe the Swan River was carved by the Waugal, and greet the dreamtime serpent here by rubbing sand on their bodies and throwing it in the water. The Swan River is the main attraction in the park as it thunders through in winter and meanders by in the drier months, lined with smooth granite boulders. The Echinda trail starts beside the lower pool in Walyunga and follows the river past Syd's Rapids. It then ascends steeply to Woodsome Hill from where there are excellent views of the Avon Valley.  It passes through heathlands with hakeas, grevilleas, verticoRoadias, hibbertias and triggerplants. Although the animals except for kangaroos are elusive during the day, there is a myriad of Birdlife including galahs, parrots, black-faced cuckoo shrikes, thornbills and fantails. The trail is best walked anticlockwise, so as to avoid a slippery and steep descent. Its marker is a black footprint.

Previous
Meeka Lookout (2.5km)
Next
How to Spot and Treat Mild Dehydration