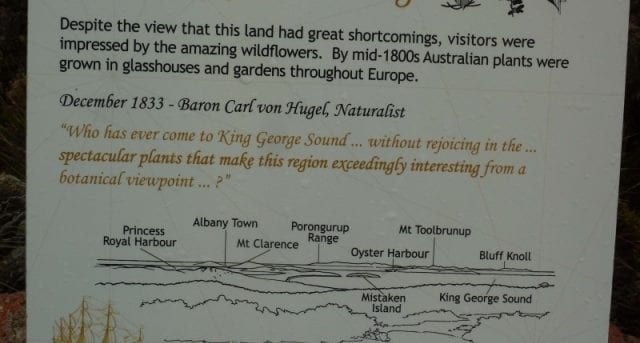 Stony Hill is a delightful 500 metre fairly level circular walk which offers spectacular 360 degree views of Torndirrup National Park. There are great views of Peak Head and the Southern Ocean.

This short 500 metre walk provides a scenic circuit with 360 degree views of Torndirrup National Park and the Albany area. The path is part of the Western Australian Heritage Trails network. Interpretive plaques along the trail describe some of the thoughts of the first settlers to this area. There are magnificent views of Albany, King George Sound, Eclipse Island, West Cape Howe National Park and the Porongurup and Stirling Range national parks. The heritage trail begins at the steps on the southern side of the Car Park. The heathland along this walk comes alive in wildflower season and there are regularly large flocks of black cockatoos, especially when the heathland is in flower.

This wild and rugged coastal park is known for its spectacular wave-carved features including the Natural Bridge, The Gap and the Blowholes. At Torndirrup National Park, windswept coastal heaths give way to massive granite outcrops, sheer cliffs and steep sandy slopes and dunes. The Southern Ocean has sculpted a Natural Bridge in the coastal granites and formed The Gap, where the waves rush in and out with tremendous ferocity. The Blowholes, a crackline in the granite, 'blows' air and occasionally spray. The noise is quite impressive.

Start Point: Car Park at Stony Hill in Torndirrup National Park a 12km drive from Albany, which is 5 hours south of Perth.

End Point: Car Park at Stony Hill in Torndirrup National Park a 12km drive from Albany, which is 5 hours south of Perth.