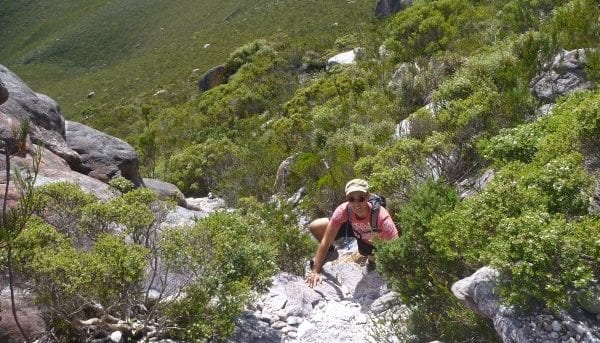 Start the walk trail at the Mount Ragged Car Park and ascend the range to Mount Ragged (Tower Peak). The walk to the summit of Tower Peak (594 metres) is a tough, steep ascent with the track overgrown in parts. Hoist yourself up some decent size rock faces and enjoy the adventure to climb within this spectacular scenery. The climb is rewaRoaded with impressive views.  Mid way up the mountain, the trail crosses a platform carved by wave action thousands of years ago when the sea level was much higher than present. Similar wave action is thought to have carved the caverns in the granitic hills of the south coast, for example, the hollow through the summit of Frenchman Peak in Cape Le Grand National Park.  Although challenging, the Mount Ragged Walk Trail also offers terrific opportunities for spotting Birds. There are known to be around 160 Bird species in Cape Arid National Park, several of which are threatened or endangered. Camping is available at Mount Ragged, providing toilet and barbecue facilities. Campsites are not bookable and operate on a first come first served basis. Approx 850km from Perth the trail is accessible by 4WD only.  From Balladonia on the Eyre Highway there is reasonable gravel road for the first 60km before changing to a rough, rocky sand track.

Cape Arid National Park is a wildly beautiful and biodiverse area. Coastal sandheaths, mallee and low granite hills extend inland to Mount Ragged after which the vegetation is transformed into woodlands dominated by saltbush and bluebush. The jagged Russell Range, which rises to its highest point at Tower Peak (almost 600m), comprises ancient uplifted quartzite that has the same origins as the Barrens Range in Fitzgerald River National Park.